How can we help you?
Leave us a message

In the heart of the Po Delta

A hike in the Po Delta to be complete, must include a stop at Adria, city of ancient origin which gave its name to the Adriatic Sea. The ancient Adria had therefore to record a substantial commercial vitality, characterized as an important reference for the Greeks and Etruscans, with their presence, contributed decisively to raising the socio-cultural area, finding forms of fruitful cooperation with the peoples Venetian residing there.
Routes to the Po Delta: The Polesine "hospitable land between two rivers", interesting itineraries are affecting the location of Villa d'Adige, Badia Polesine, Guarda Veneta with the Museum of the great rivers, a town between South Adriatic and Po, the Isle of Ariano The Sack Scardovari, Porto Levante Porto Viro, Rosolina and Rosolina Mare with its Botanic Garden, Isle of Albarella with its fjords. 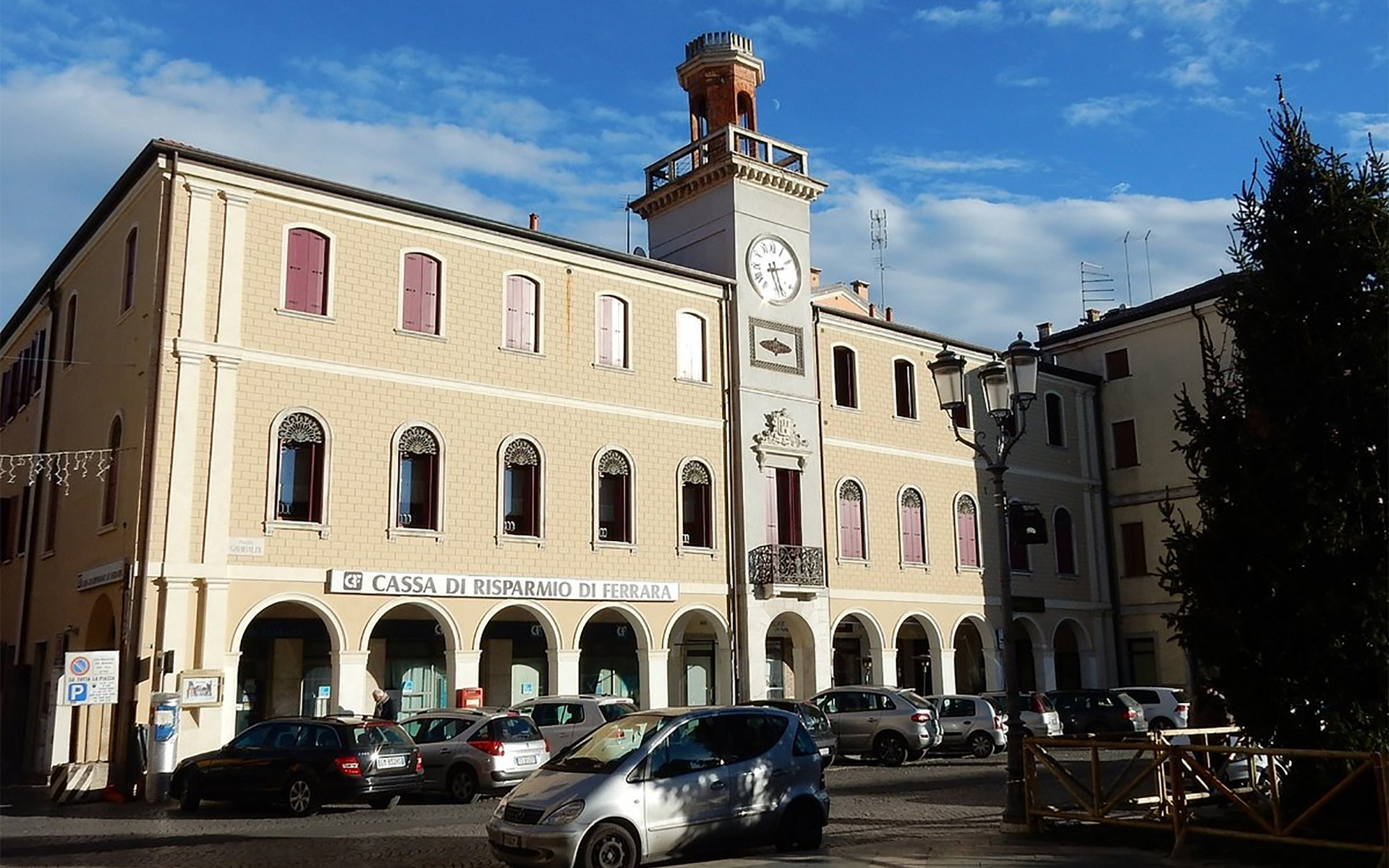 The palace was built on the old Town Hall. In the central part of the building stands the tower with the clock. The building like the cathedral and other nearby buildings overlooking Piazza Garibaldi, better known as the Square "Castle". As regards the derivation of that name it should be noted that the center of Adria, until a few decades ago, was enclosed between two branches of the river that separated Canalbianco west of the city to join immediately to the east. The area enclosed within it was called "island" while the southern and northern districts are called today the "Grave" and "Castle". A castle itself, which certainly existed in ancient times and included a few blocks, there are no visible traces. Some element of stone or brick is surfaced during excavation and a tower that was part of it is depicted in an engraving of Giampiccoli. The theme of the castle and the tower is also reflected in the coat of arms. 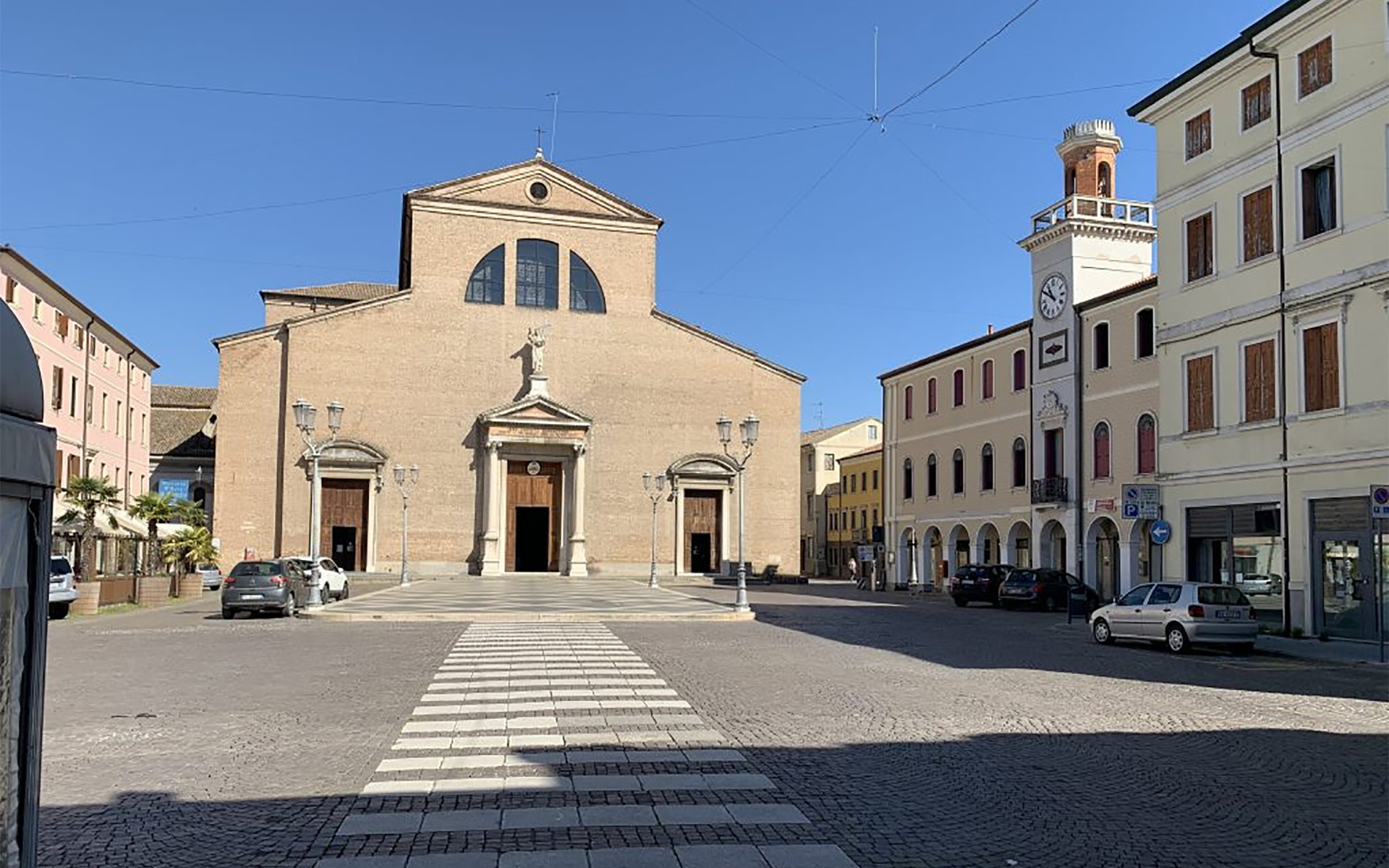 It was built in the early nineteenth century in a building of four hundred, in turn built on an older one. In 1830, during work to test the solidity of the foundations were unearthed the remains of the crypt and then Byzantine frescoes that were damaged in 1951. The cathedral contains: a sixth century Byzantine bas-relief carvings in greek with a crucifix on the table and Byzantine style, in the sacristy, beautiful cabinets carved by Jacopo Piazzetta from the school of Charity in Venice. 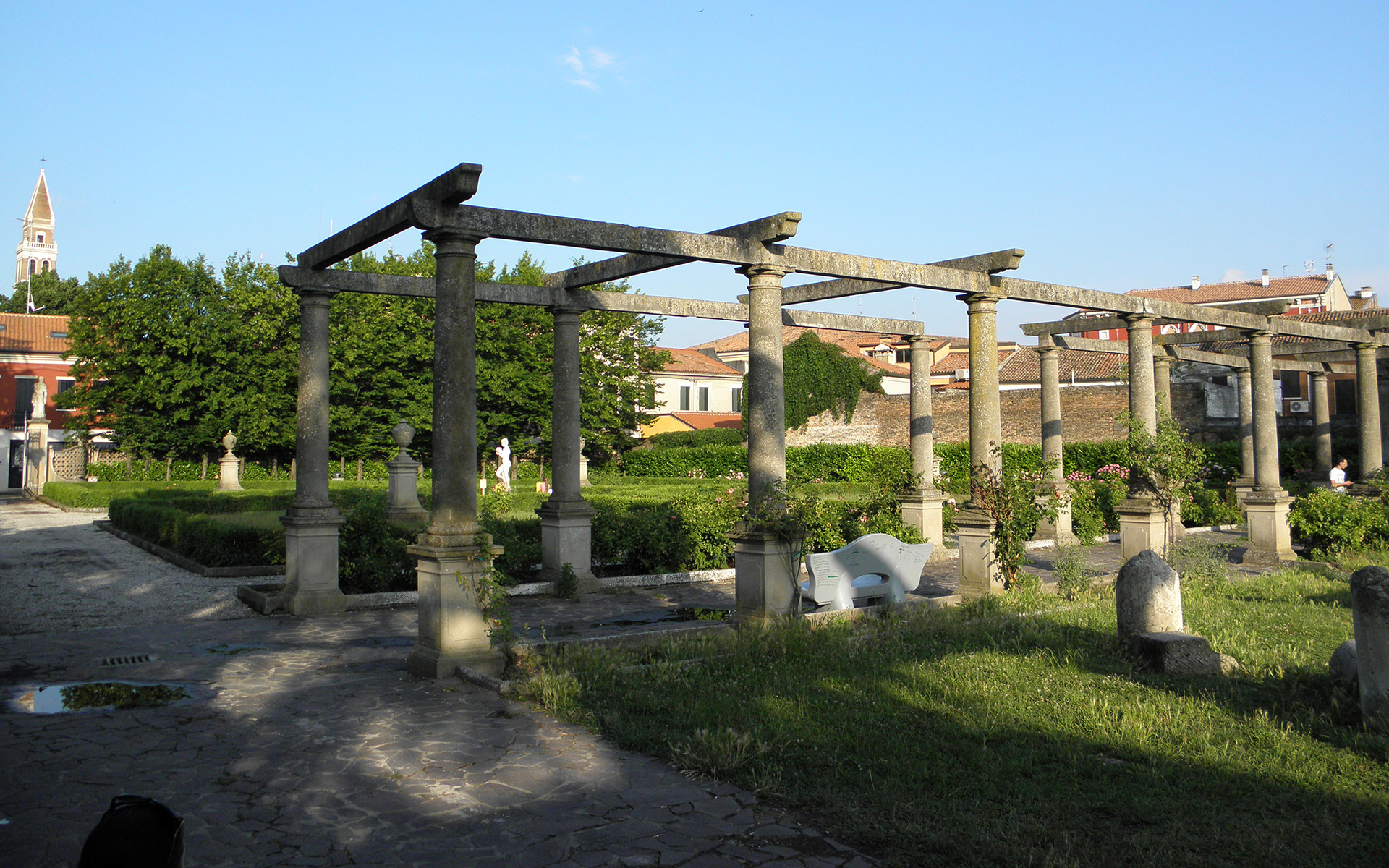 The gardens "Scarpari" named after the family that was originally part owner, following the acquisition, the assets of the Municipality. The gardens flanking a building of 1800, disguised in the immediate pre-war decorations inside and outside of eighteenth-century imitation. 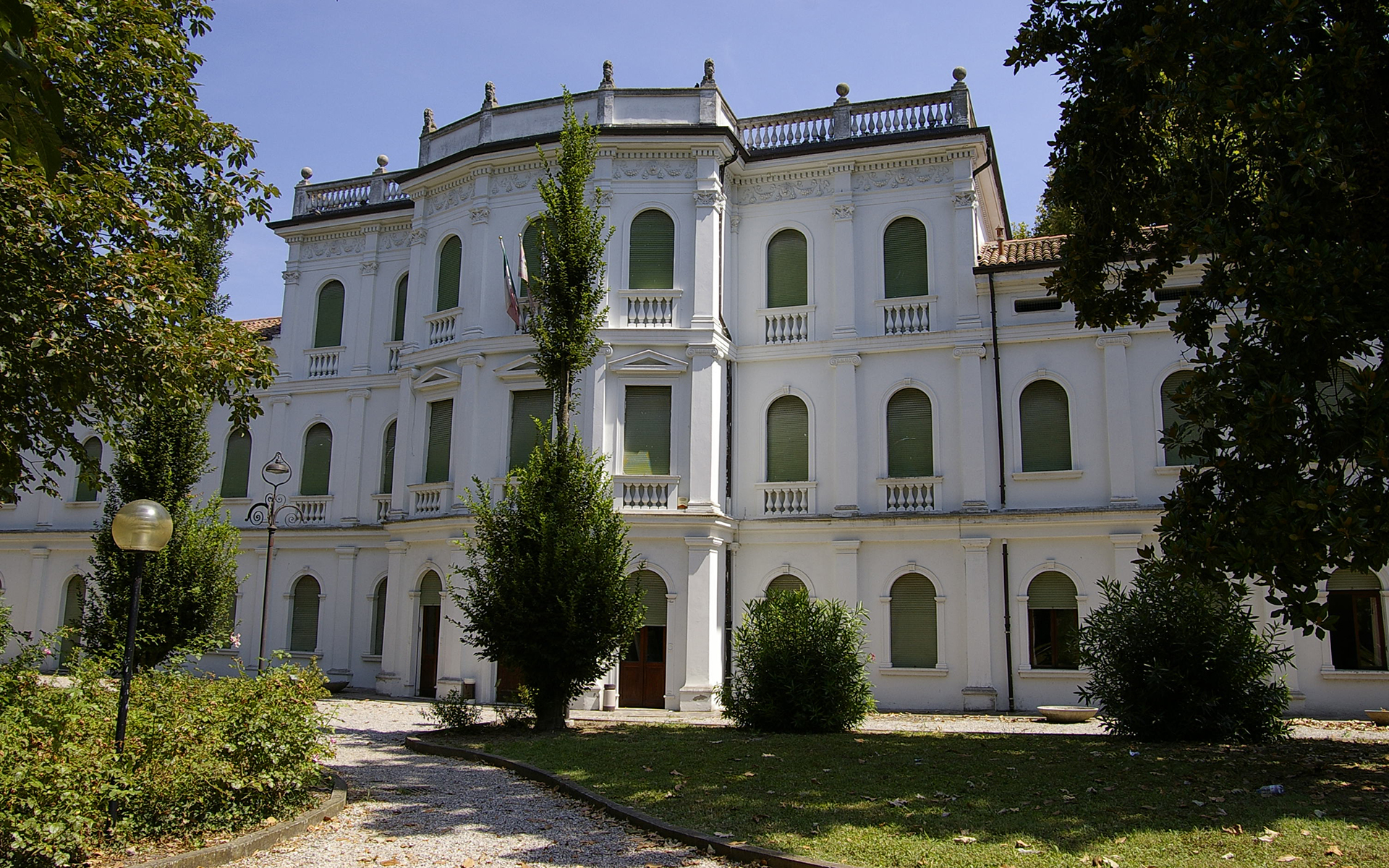 The building was originally a rustic part in a large farm. It was then transformed into a villa-style empire at the center of a large garden. The villa from 1972 is home to the Conservatory of Music "A. Buzzolla" following the donation to the City for last will and testament, the owner's master Ferrante patrons. 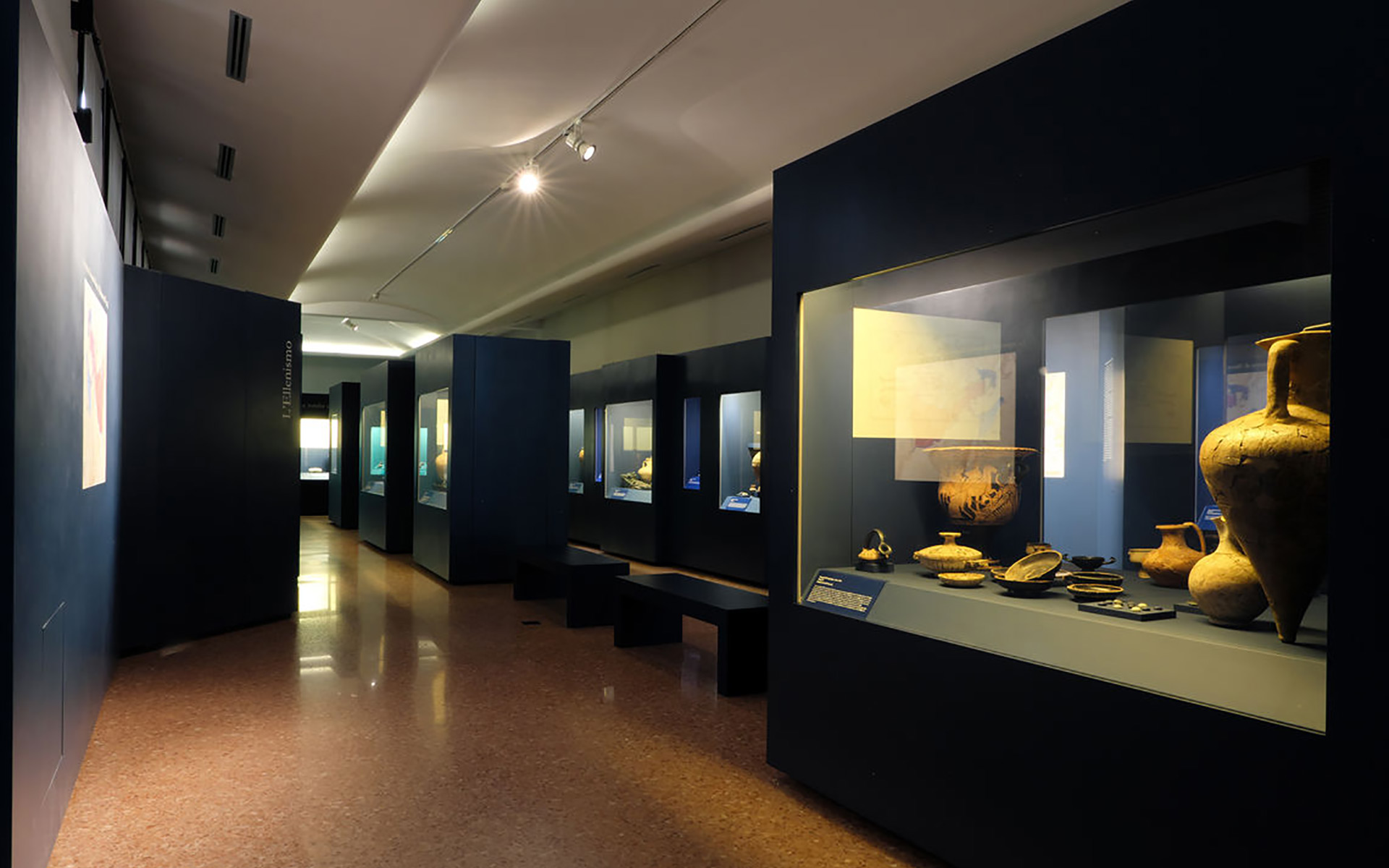 Gathers ancient relics that characterize the various stages of development of civil Adria. The museum collection comes from the mouth, the family that already around 1770 and began collecting reperrti to perform the first search the underground city. In 1904 the museum was opened. The building that now houses the museum, and which follow the transition of responsibilities from the State Town dates back to 1961. In the museum are preserved, among others, tools and pottery from the Iron Age, Attic black-figure vases and red, jewelry, furniture, etc.. 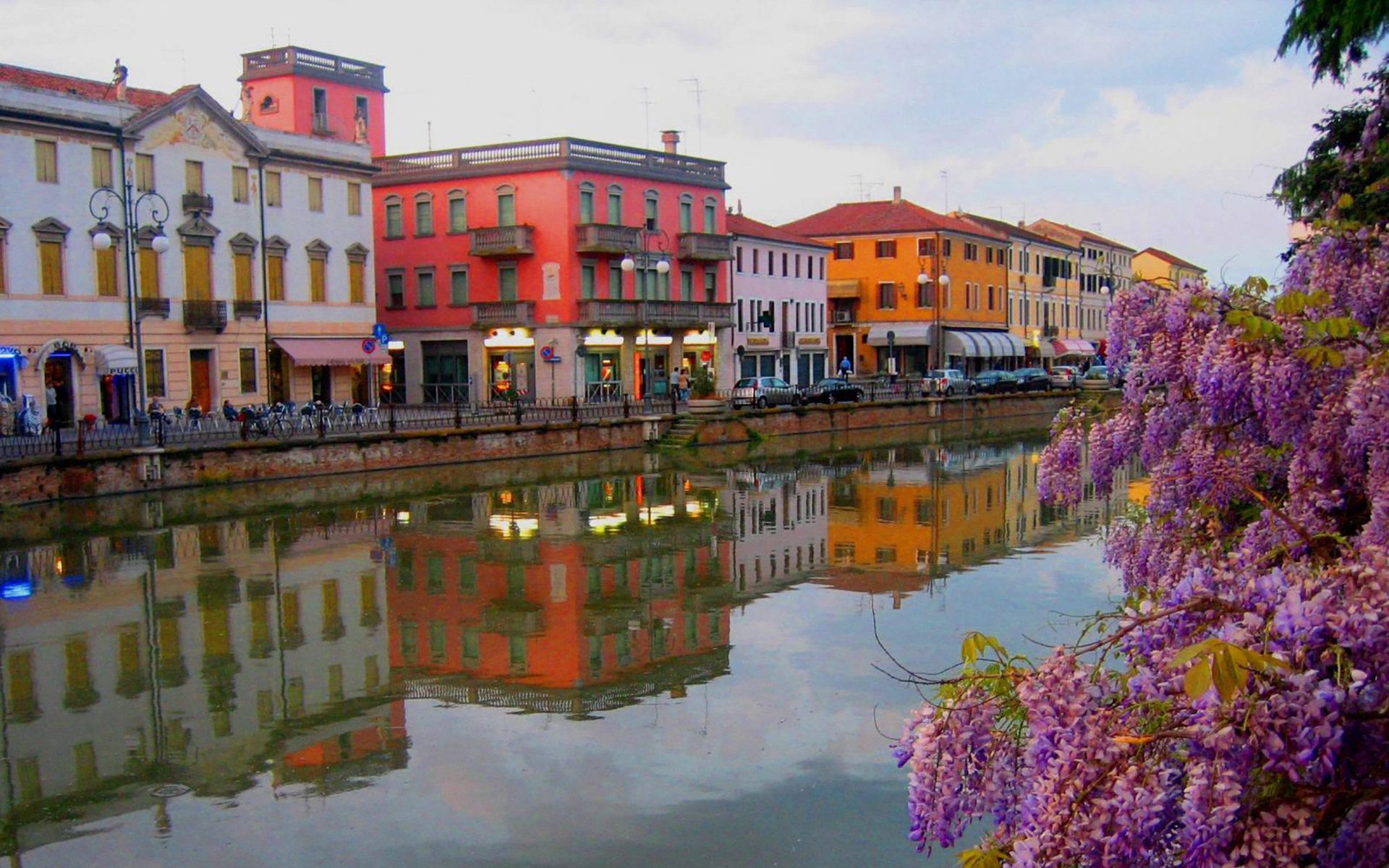 Flanked on the north branch of the internal Canalbianco, west of the bridge Castle Riviera Rome (formerly Riviera Gardens) East Coast Matteotti (formerly Riviera Belvedere). To the south east of the bridge Canalbianco Andrew Riviera Rome. In the stretch between bridges Canalbianco aforementioned (Castle and St Andrew) in the past used to call the barges and bragozzi used to transport goods (mainly grains, flour, vegetables, timber, coal) between Adria and areas of the Delta and the Venetian lagoon. Loading and unloading of vessels was carried out by porters. They succeeded in a row, bent under heavy sacks on narrow wooden walkways placed between boats and plots drawn on stone muraglioni.Indossavano almost all a black shirt, not for membership of a political ideology in vogue, but for camouflage dust and dirt that were accumulating. They were divided into groups called "caravans". Each had a leader and not infrequently were angry scuffles between a caravan and the other to win a drain or to share the proceeds of a hard day's work. 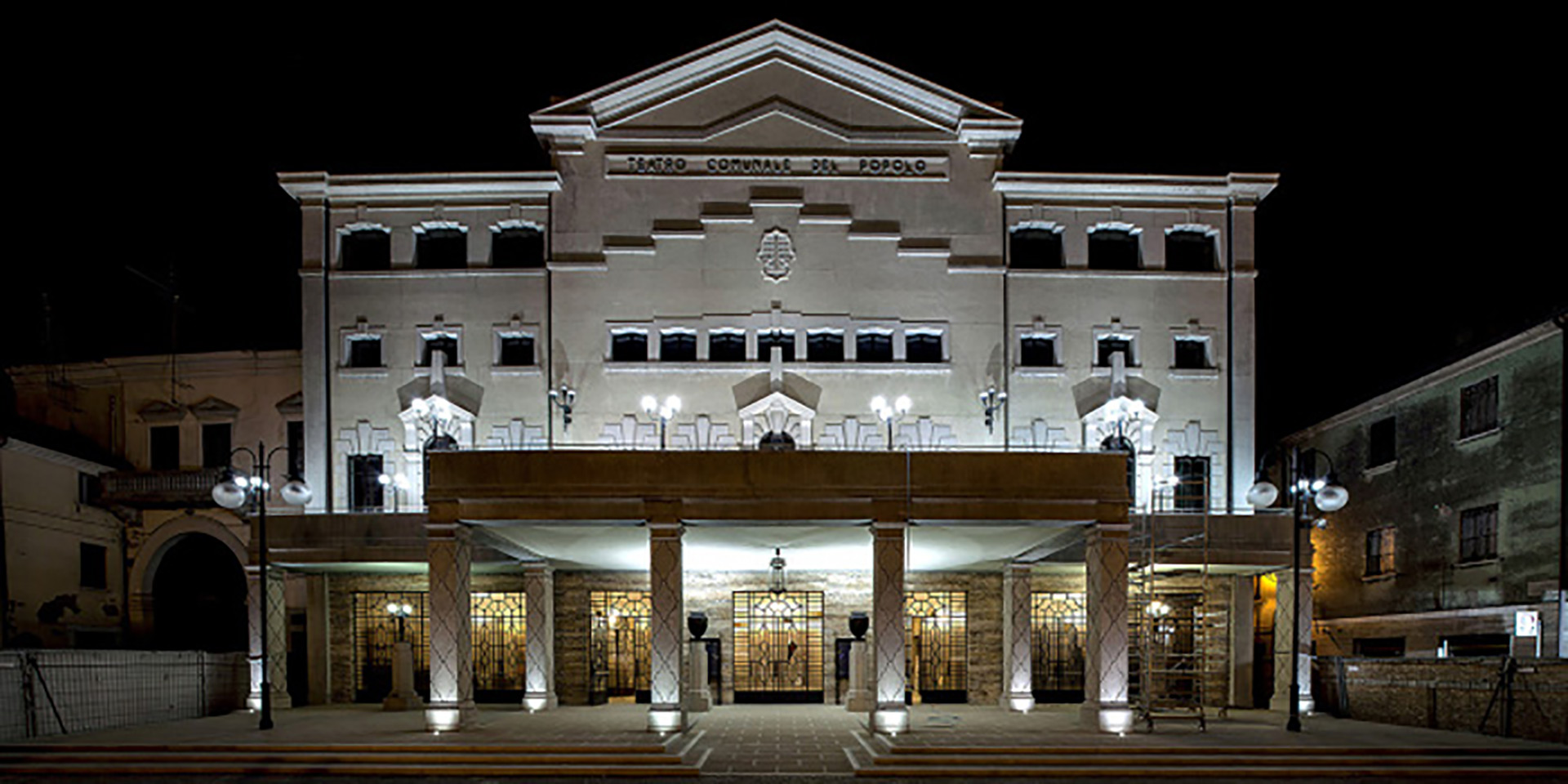 The musical and theatrical life of Adria has ancient roots. It seems, in fact, confirmed the presence of a Roman theater in the area where now stands the hospital. But it is in the second half of the sixteenth century, the impulse of Louis Grote, the "Blind of Adria, the city furnished with a theatrical frame in which some of his works were performed. Apart from a few shows that took place in the seventeenth century and which has uncertain news, you get to 1803 were used as a theater because the former church of St. Stephen (the theater is named). Documents and testimony do not form defect in a theater that was called after the turn of the year and change management "Fidora theater, theater of the Company" and "Orpheus Theatre. The activity of this stage covers about a century and establishes the terms of a tradition still very much alive Adries that substance in melodrama in opera. A new structure, after long preparations, was inaugurated in September 1935 and is now the Municipal Theatre (as it was called in recent times after being the "Teatro del Littorio and the" Theater of the People "). The municipal theater after seasons continues to host prestigious opera and prose always decent and keep the tradition alive Adries. 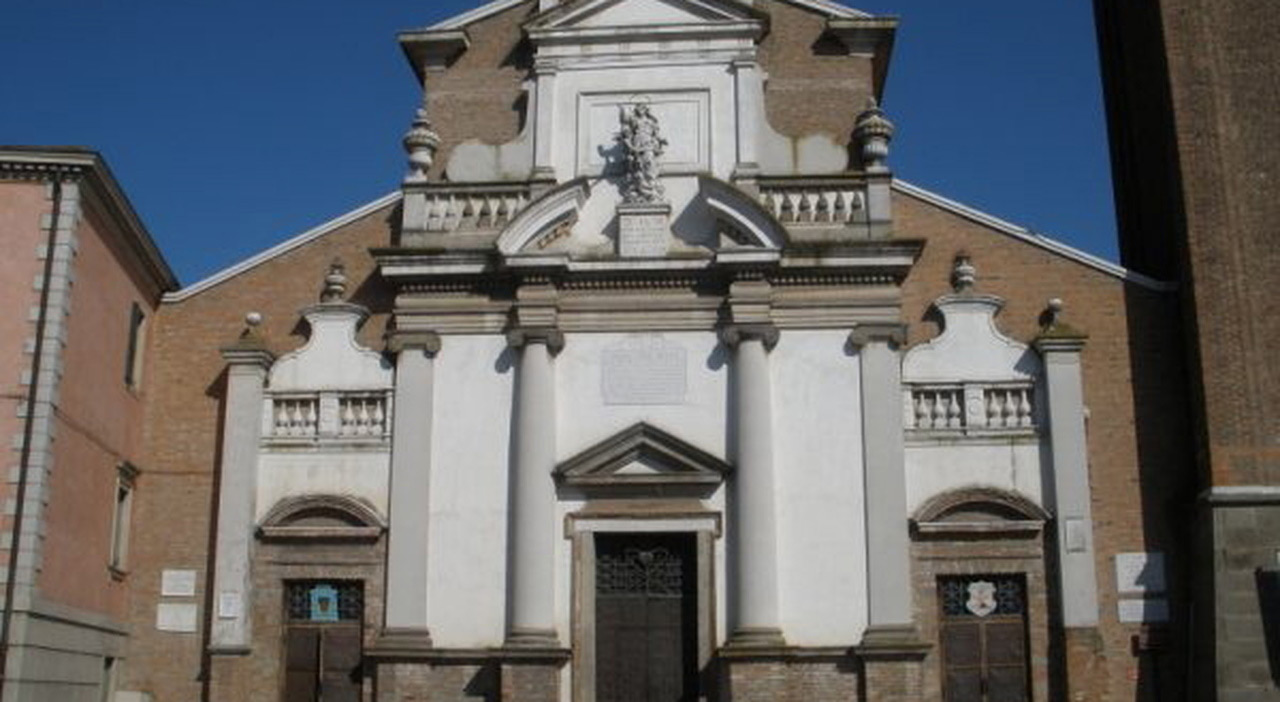 The primitive Church of the Tomb, which dates to the early Christian era, seems to have been built on the ruins of an older pagan basilica. The present structure is mainly the result of interventions during the eighteenth century (new front in the forward position than the previous) and others operated between 1930 and 1940. Name "the grave" or "the grave" seems to derive some proximity to the construction of a tomb of Roman and others raised by area (for tumulum) than the surrounding where the Basilica. The current tower is the third of the basilica, since the first was nothing but the ancient Roman lighthouse in Adria, then adapted to the use of bells, the second one built in the fourteenth century along the section of the same lighthouse demolished to a height of ten feet off the ground and the third (current tower) opened November 15, 1931, Venetian-style reminiscent of the bell tower of San Marco that stands for much of the existing. An inscription in Latin on the south wall of the base recalls the origin of the structure with the following:

'What was once - tower - and guided the course of vessels - still are - tower - rebuilt in 1931 - and with my guide showing people the Sky - and my voice call those who have to go to temple .

Inside the basilica custodide some valuable works including: the octagonal baptistery consisting of a Roman, a crucifix sixteenth object of particular devotion, frescoes and sculptures. 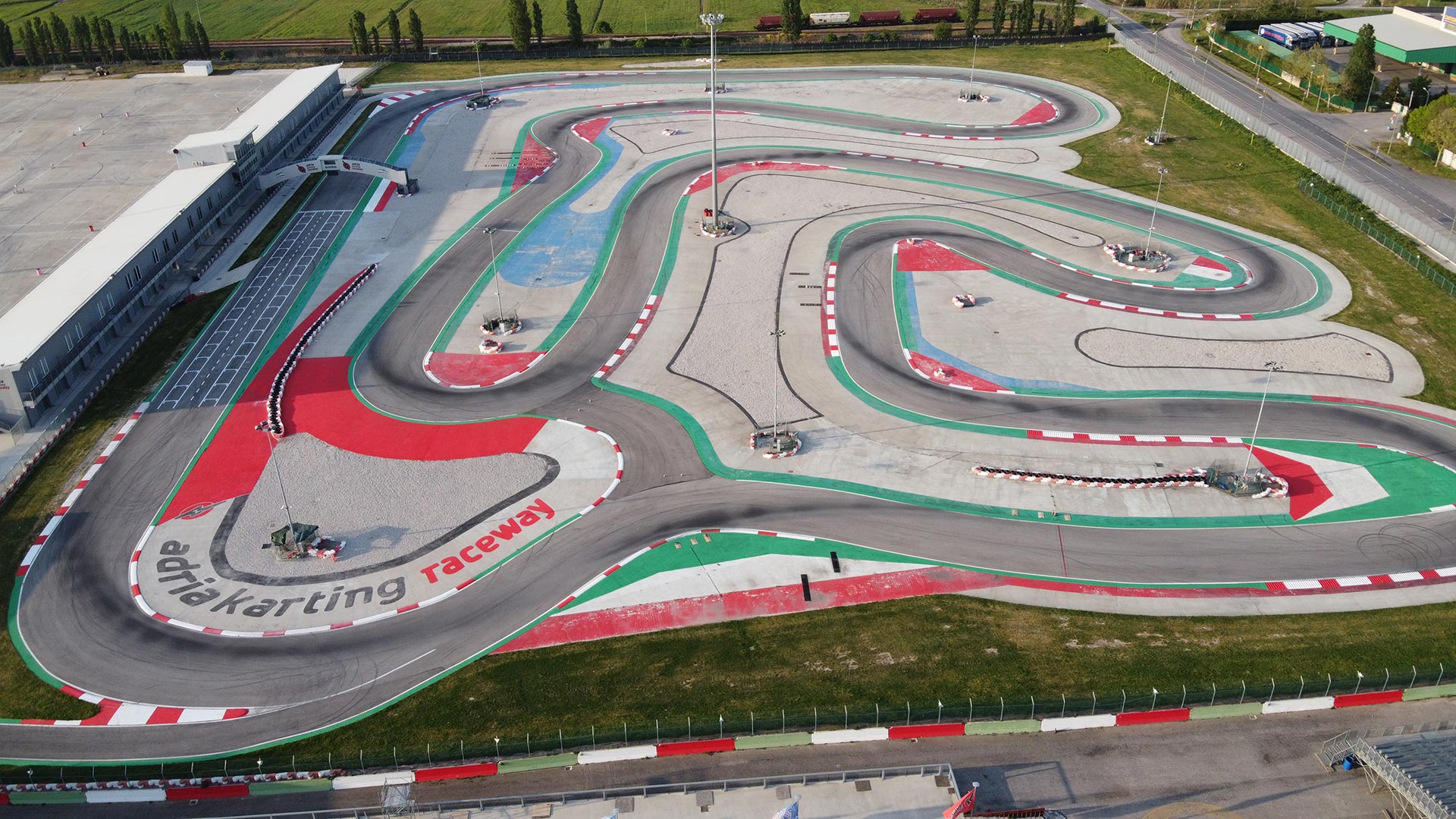 Land of great passions and motor drivers of great value, the Veneto could never have its own car-motorcycle circuit. From here started the idea of a group of individuals, lovers of racing, to achieve in just a couple of years a plant capable of leading and accontantare the needs of both motorcycle enthusiasts and those cars .
Adria International Raceway is the pearl of great multifunctional complex on the outskirts of Adria was born in Rovigo province a few kilometers from the sea. Designed with the technical skills of technicians always familiar to the world of motor racing, the project was immediately enthusiastic membership of both the Commission motor sport that Italian Italian Motorcycling Federation. This allowed a very rapid process that has arrived, at the end of 2000 (a few months then the start of work) to the prior approval also of the FIA (International Automobile Federation). The plant has the strength of a very challenging layout, designed without resorting to anachronistic chicane, which comprises less than 3 km and can be decomposed on two shorter and completely independent circuits, one of which has a artificial irrigation system useful for specific testing sessions for both cars or racing bikes be for the development of means of production to large series. In making them unique in the world thinks the Adria International Raceway great coverage of the paddock, spectacular and innovative that transforms area behind the pits in a shelter for motor homes and hospitality, but also opens the way to events comprising very different always sheltered from the sun or inclement weather. Then complete the whole three floors of the garage, the installation of safe driving and the heliport.